We started up again with the nap transition, this time opting for the "make the morning nap shorter and shorter until it's gone method" because I thought it would be the easiest to do gradually, which is what I thought would suit my kids.

For about a week or so now, I have been limiting their morning nap. Usually I don't have to wake them up but every once in a while I do. Also, I moved them into the same room for naps as we will be decorating the spare room for Tater Tot. So, I'm not sure if the difficulties I'm facing are because of the nap transition we're doing (gradual as it is) or because they are napping together. As I write this, I can hear Collette gabbing away. It's 2:20 and they went down around 1:10. A few weeks ago, they were napping for almost 2 hours in the afternoon so I feel like things have gone awry.

One side of me thinks that perhaps they are ready to less gradually take away that morning nap and I should be a bit more aggressive. Maybe I'm still letting them sleep too much and it's affecting their afternoon nap. The other side thinks its just a result of Collette napping in a new place, she will get used it, and I should stay the slow and steady course.

My goal is to be on one nap by the end of March, but the sooner the better, IMO. So, wise ones - thoughts?

This weekend will be my second ever time away from my kids. I'm headed to Richmond, VA, to visit a dear friend who is expecting her first baby at the end of March. I'm so looking forward to catching up with her, helping her get the nursery ready, gabbing about life - all the things close girlfriends do in these situations. It will really be lovely, in that relaxing, do nothing, kind of way.

When I tell people about the upcoming trip, they immediately try to assuage my guilt, saying things like, "Oh, it will be so hard to leave them but you'll have such a good time" or "Don't feel guilty - you deserve it!" Then I try not to make a rude face because all I can think is, "are you on crack?" I never have the chance to miss my children. If anything, I get an overdose! I know they are my children and I love more than words can say, but time apart is a good thing. And I'm being completely honest when I say every last little fiber of me feels that way. There is no little voice making me feel bad for going away. No pangs of guilt. No 1%.

I'm a bit surprised at the reactions I got. Am I the only mom who feels this way? Surely there are other people who don't feel guilty leaving their kids 4 nights (or more, if you're lucky) in 15 months. I understand mommy guilt, especially when you don't spend as much time with your kids as you'd like. I don't think anyone should have to feel guilty for the choices they make when their family's best interest is at heart, but I understand it happens anyway. In this case though, I don't understand why someone would feel guilty. Then again, I'm not winning any awards for sentimentality, so...

Would you feel guilty? Or would you just blow a kiss and be on your merry way?

Email ThisBlogThis!Share to TwitterShare to FacebookShare to Pinterest
Labels: about me, mommy frustration, travel 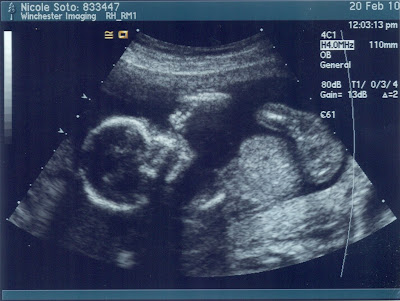 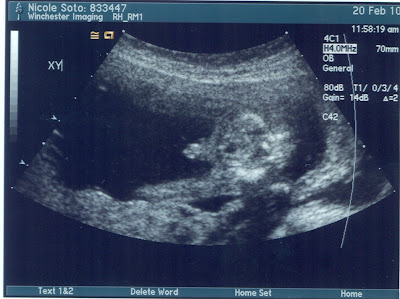 Mateo Soto is very pleased to introduce himself here on the blog. If all goes well, his next photo-op will be on his birthday.

Email ThisBlogThis!Share to TwitterShare to FacebookShare to Pinterest
Labels: pregnancy

When it's over 40 degrees outside, sunny, and and it's February in New England, you have to get out of the house - even if you don't have the proper footwear. You just have to improvise and enjoy the day. 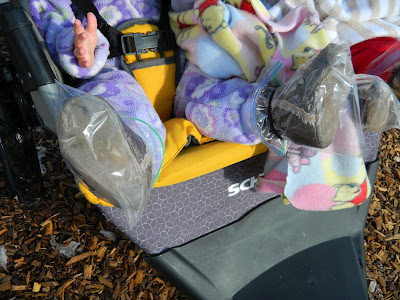 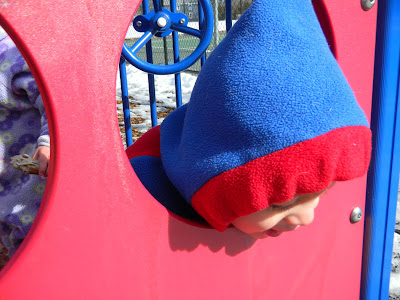 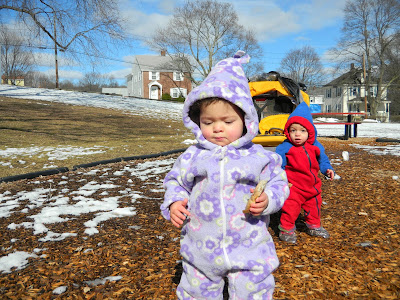 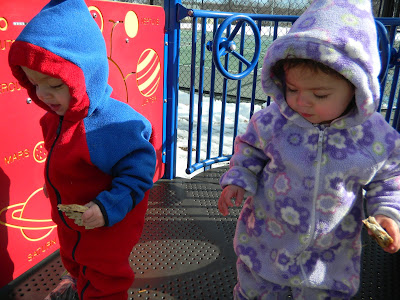 One week late but here it is! Sadly, I don't think I look much bigger than my 12 week picture. I'm so used to a huge twin belly, I can barely believe I'm still sleeping on my stomach at this point. But this time, I guess I'll be pregnant for 6 WEEKS LONGER than I was with the twins so I should be glad everything is going slower. :) 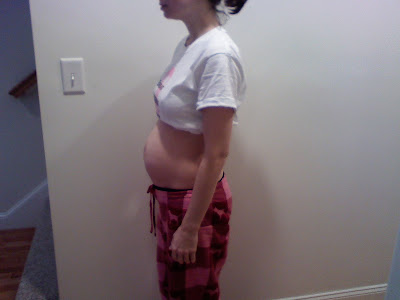 Also, I have been feeling this little nugget move around - very cool! Billy is jealous because he can't feel it through my stomach but hey, us girls need to have some perks if we're in charge of actually growing and housing the new human.

Saturday we find out if it's a boy or a girl - any guesses??

I'm one of those moms that likes to read parenting books. I read pregnancy books and I read books about babies and then how to make them sleep (best thing I ever did, besides give birth to said babies) and now I am delving into the realm of how to deal with toddlers. I got a few books from another MOT. One was by the Dr. Karp - he's the Happiest Baby on the Block guy. I'm with him on all the S's for getting your baby to sleep (especially the swaddle, God bless it) but when it comes to the toddler stuff, I wasn't feeling it - he wants me to speak to my toddlers like they are chimps. Actually, he points out that, at 14 months, a chimp is more advanced than my kids. Probably true, but no thanks - I like speaking like a human and hope my kids will too, someday.

Next up was the Girlfriend's Guide to Toddlers. Most of her advice was OK but all stuff you've alread heard - pretty much like, "Omigod, having kids is so hard and embarassing and gross but we love them so much!" Not really expert-y, IMO. I like advice that has a real point, not just something I could hear from anyone at the park. But still, there is lots of value in this kind of advice if you don't have moms at the park to chat with. So, I read on.


Things were going OK until she told me never to take my toddlers to a restaurant. Really? That's the worst advice I've ever heard - especially coming from another mother! I know lots of people feel that little kids should not be in restaurants but here's how I see it: There are fancy restaurants that are pretty much for adults only. It's not a rule but that's the atmosphere. In those cases, I get it. You won't see me and my twins at Mistral any time soon. But regular, family restaurants? I don't see why not. If you are prepared - and you should be, for your own sake, your kids' sake and the other guests - then eating out with kids is not a problem. My kids actually behave better in restaurants than they do at home. So maybe her advice should be learn how to have a successful outing with your kids instead of just locking them up inside until they're 5.

Also, if obnoxiousness is qualification for never going to restaurants, maybe teenagers should be banned, too. :)

What do you all think about kids in restaurants? Am I the crazy one?

Tales from the Crypt

We're all back from the dead. Again. Collette got it first on Thursday morning - she was covered in puke in her crib when I got them up in the morning. Poor baby didn't stop until naptime, around 10am. I had to rock her to sleep in the big recliner. She looked so sad but so sweet. 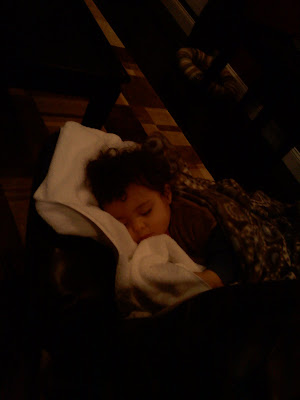 Sebastian got the bug by that afternoon - same crib scene. His didn't seem to be as bad, thankfully. Collette had a repeat that night, about a half hour after bedtime. Poor kidlets.

On Saturday, I got it and so did Auntie Kim. My stomach pains and lightheadedness were so bad that I called my OB and she had me go to the hospital. They put me on an IV drip and gave me some Zofran and Reglan, thank the sweet Lord. I spent nearly 6 hours there but it was worth it. Since then, I've been on a strict diet of Gatorade, apple juice and toast. But now, everyone is feeling better - we even went to the park! Here are some shots, not at the park though - naturally, I forgot my camera :) 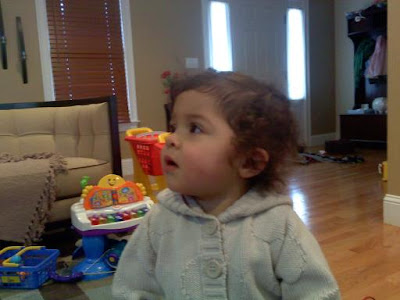 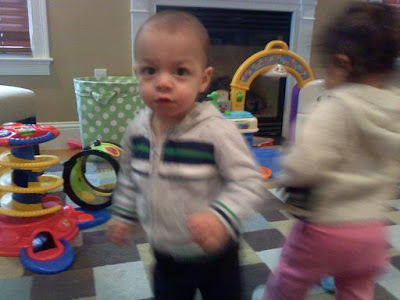 Email ThisBlogThis!Share to TwitterShare to FacebookShare to Pinterest
Labels: illness

I keep making excuses to not take the kids to the Children's Museum. It's cold out. It's too far. It's too hard to squeeze in between naps. But the (only) real reason is I was scared. I haven't been to the Children's Museum in ages and I just remember it being so big and crowded and overwhelming (in a good way!) that the thought of taking two just-turned-one-year-olds by myself seemed like too much. I worried that it would be a struggle to get there, with parking and getting in, etc.
But today I finally bit the bullet. My usual play date had to cancel and I figured, why the hell not. And you know what? It wasn't so bad. Could we visit the exhibits? No. Could we stay for more than 90 minutes (including lunch)? No. Was it worth it? Definitely! The kids had a great time the play area. It's big so it was hard to keep them both with eye-shot but we managed. I packed their lunch but not mine so we ate at Au Bon Pain. It was nice to be out with them and have a good time and eat and be relaxed. I didn't feel rushed which was probably the best part. They do well with new places - they are distracted by everything NEW that they forget to fuss.
As for photos, I only got one good one. Sebastian in the train table, having a grand ol' time. Collette escaped before I could get a good one of her. Sigh. 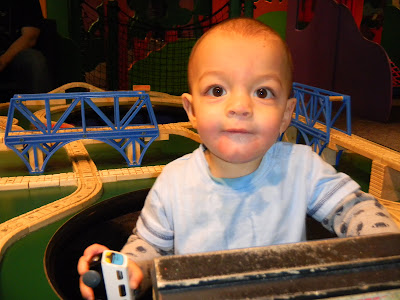 It's been a week since I posted. As my loving sister, FavAuntie, has reminded via email and text. Well, sis, I hope you feel good guilt-tripping me as I have been dealing with two sick kids, a sick, pregnant self AND had to miss my first solo weekend away.

To catch you all up, on Tuesday evening, Collette projectile vomited in the playroom and could not keep anything down for the rest of the night - not even a couple sips of water. I had to skip my twin's club meeting to help Billy hold down the fort - we aren't used to baby sickness around here, thankfully. Luckily, she was much better the next morning, just tired.

Fast forward to Thursday night/Friday morning. I woke from a dead sleep to follow in Collette's footsteps. This went on until Friday night. I could not eat or drink anything (seriously, not more than tiny sips of water) for at least 24 hours. Billy had to leave work early to come home and rescue me. Friday evening, Sebastian joined in the fun. Good times.

I was suuposed to visit my best friend in Portland, ME on saturday and stay over - my first time ever going away with kids or husband since the twins were born. But on Saturday morning, all I could eat were saltines and Sebastian was still sick. So I stayed and recuperated and helped as much as I could. Needless to say, blogging has not been high on my list of priorities as of late.

Also, to update my last post about our nap transition, we have abandoned ship. Because or playmates abandoned ship first. The twins are still doing fine with 2 naps so there is no harm in keeping this going for a few more weeks, at least. The Children's Museum will just have to wait :)
at 10:49 AM 4 comments: