Sebastian and Collette are headed west through the amazing Gateway Arch! 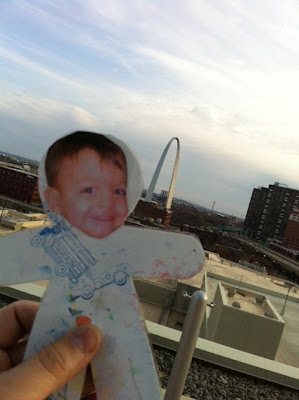 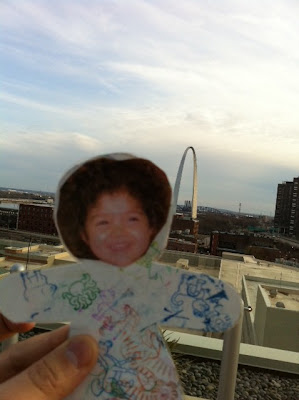 They were excited to see their flat selves but I'm not sure if they fully understood that Daddy took the picture on his trip. Either way, they were happy and it definitely makes Billy feel more connected to us when he is away.

While Billy was on his epic Asia Tour, I had the idea to make something he could take with him from the kids when he went on long business trips. I had the idea to blend the Flat Stanley idea with that commercial where the dad takes the little girl's monkey stuffed animal with him and takes pictures of the monkey in all the cities he visits. And that is how Flat Colie and Flat Sebby were born.

Making them was easy enough, if your standards for craftiness are as low as mine. Like the silhouettes I did, I found a nice, smiling picture of each of them, cropped it and pasted it into a powerpoint document. I printed it out in color and cut out the faces. 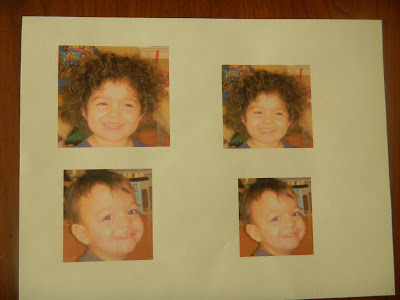 For the body, I went with the Gingerbread man outline. This one is free handed (as you can probably tell) but its very easy to find a nice template online. 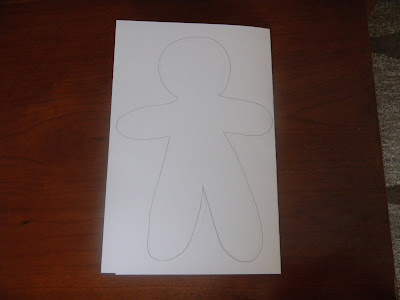 To get the kids involved, I cut out the bodies and let them decorate it before I put the faces on. They have been really into stamps lately so that was our medium of choice. Once they finished, I glued on their faces to both sides: 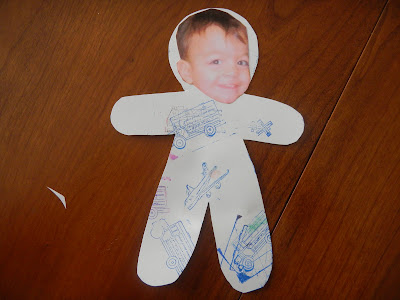 They really loved the finished product, which was laminated for protection. It was actually kind of hard to get them to give them up. They gave them to Billy but then wanted them back about 4 seconds later. He had to tuck them away in his briefcase while they were napping. 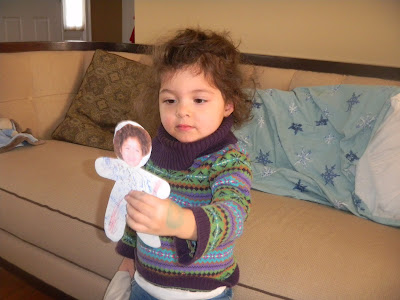 Colie, admiring her flat self

Billy just left for St. Louis and will hopefully be getting some good shots of Flat Colie and Flat Sebby at the Gateway Arch. I'll be sure to post 'em when he gets back.

As of one week ago, Collette officially graduated from Early Intervention. Last Thursday, Sebastian and Collette had their reevaluation. After talking with their case worker (who has been with us since the beginning) and Sebastian's SLP, who also monitors Collette, albeit unofficially, I was fairly certain that Collette would not qualify for services and that Sebastian would. Even Sebastian is borderline, as its mostly pronunciation that is the problem. Of course, I can understand him well enough and so can his SLP because that's her job. But she had to evaluate him more objectively because most "lay people" would have no clue what he was saying most of the time.

So, I only have to pay for one kid now (woo hoo!!) but still get the same kind of support I was getting before. The one dilemma that we now face is with their drop-off play group, or "school" as I like to call it. Collette is now considered a community child, which means she can still go to group and be a role model for the kids that are in Early Intervention. Wonderful. However, our group already has the maximum number of community kids in it so they're not sure what to do. Obviously, I cannot sit outside in the next room (where the parents wait while the kids are in group) with Collette and Matteo and chitchat with the other parents - Collette would flip her shit not being allowed in. So, the options seem to be:

If I had to rank these choices, it would go 2, 1, 3, 4. 3 and 4 really suck because I think Collette's presence makes Sebastian feel better, even when they aren't playing together. Luckily, our case worker (who is also one of the teachers in their group) agrees and is trying very hard to work something out. So, we'll see. Needless to say, I'll be pretty upset if Collette can't continue. Fingers crossed that it doesn't come to that!

When the kids are being mischievous, Billy will call them "amenaza" which is how you say menace in Spanish. Lately, they have been total amenazas, but in the cute way, not the way that makes you want to send them off to military camp.

Example 1: After getting up from their nap, Collette and Sebastian decided to play in my room. They seemed to be playing nicely enough, bring me all of their fathers shoes, one by one. A minute or so went by without a shoe delivery and I wondered what they were up to. Just then, they both ran back to me (I was in their bedroom with Matteo) both soaking wet! I asked them where they got the water and they escorted me to my bathroom, hopped into the shower and turned it on. Lovely. Did I mention that they can open doors now?

Example 2: Matteo is getting frisky as well! He is now able to move forward in his walker. This allows him to actually go after things he wants. The other day, he zoomed up the art easel, pulled off the giant paper and started eating it. But he won't baby food - go figure!

Like I said - menacing, but in the cutest of ways. I'm really loving both of these ages. Not looking forward to the terrible twos...

That's what I get for breastfeeding

In a desperate attempt to see other adult life forms, I brought the kids to the mall to hang out for a bit. We did the usual - play area, checking out the fish at the Rainforest Cafe, practicing walking and listening. That last one is new - now that Sebastian and Collette are old enough (kinda) we have been doing a lot more things out of the stroller.

Anyway, on our way out of the mall, Collette had taken up the front and Sebastian was in the rear, no surprise. Suddenly, I heard him mumbling something and a man was laughing at him, pretty hard. I turned around to see him pointing at a Victoria's Secret poster, finger right on the model's bra, saying "booby!!". More people passed and laughed. I couldn't help but laugh, too. It was a proud moment in parenting.


- Posted using BlogPress from my iPad

My little Tater Tot is 7 months old today. This has been a very enjoyable age, especially since he is now 100% sleeping through the night and on a very predictable nap schedule. He's now dropped that third nap and takes his second nap right after the twins go down. His first nap is on the early side, between 8 and 8:30, so that he can wake up early enough for us to get out and about.

While he perfected sitting up last month, this past month has been all about moving. He isn't crawling yet but damn, does he want to! This boy never loved being on his belly but now I find him that way all the time, trying to get up on those knees. I wonder how long it will take him to figure it out.

The only "issue" we're having is with eating. he still doesn't like to be spoon fed but also won't eat soft pieces of food. Mommy Esq. gave us some of her old mesh feeders and those have worked but he still eats very little this way. On the bright side, he is at least feeding himself.

Overall, Matteo is just a happy baby. Everyone comments on how he is always smiling and laughing. He is terribly ticklish. He loves his brother and sister and watching them play or makes faces at him. And he loves to talk! Mostly just "dadadadada" for now. 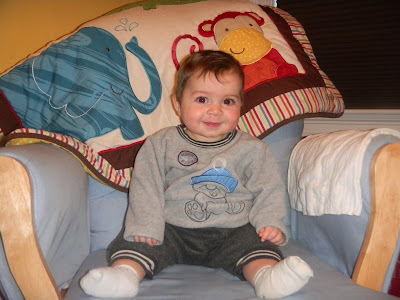 Embracing the domestic goddess within

During a hop around the blogosphere, I stumbled upon a blog that focused mostly on crafts and things of that sort. This isn't usually my thing but I think I linked there because this one post had something to do with cooking. Much more my thing. I would link you there, too, but for the life of me cannot find my way back.

Anyway, her post was all about making a monthly menu board. This project was more about the creating the board than it was about the planning/cooking aspect but she did touch on that. And, because I believe everything I read, I decided that I should also start planning my meals one month at a time. Her board was so pretty, it made me sad that I didn't have one. But the process seemed REALLY involved so I settled for a magnetic white board calendar from Target. For now, its not so pretty but the idea behind it - planning your meals ahead of time - has been a thing of beauty for me. 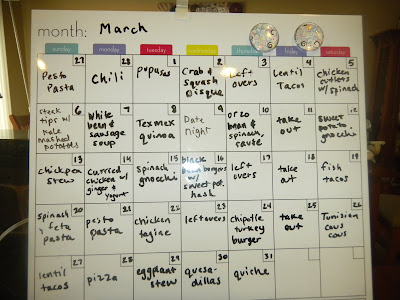 As you can see, my plan is realistic. Billy and I like to order in on Fridays so I put that down. Leftovers are always gonna happen so that's there, too. Also, I try to plan things that take longer on the weekends when I know I'll have the extra adult hands to manage the kiddos. That is, when those extra adult hands aren't on the other side of the globe for 15 consecutive days.

BTW - I made the crab and squash bisque yesterday, which is based on the one they make at Whole Foods. Too good! And - be still, my beating heart - the kids actually ate it. I guess there is a God.