Now that Matteo is three weeks old, we are all starting to get used to each other. Sebastian and Collette like their new little brother. Or at least they accept him as part of the family. They like to give him kisses and Collette will even go so far as to bring him blankets. They both like to point to his body parts - a little scary when they try to poke him in the eye. And Sebastian especially likes it when he wears onesies that feature cars. Other than that, they pretty much ignore him which is much better than acting jealous. Hopefully things will stay this way once I am on my own with them and they aren't getting all that extra attention from Mimi (my MIL).

As for Matteo, he has inserted himself nicely into our lives. He must now how spread thin Mommy will be because, for a newborn, he seems to be making things pretty easy for me. He nurses like a champ and has since day one. He gets right down to business and is finished within 15 minutes, sometimes just 10! This makes feeding him and watching after the twins manageable. And he is already developing some very promising sleep patterns. He generally takes a longer nap from about 9-11 and then again from 130-330. Otherwise, he seems to take shorter naps, especially in the evening when he is nursing more frequently. Plus, he is already showing signs of readiness for an early bedtime. he gets crabby and needy around 6pm if he isn't asleep. If this goes on, I will probably just incorporate him into the twins' bedtime and that way they will all be down by 730ish. That may mean I have to give up my one night feeding (usually around 130am) but it might be worth it to have my evenings back. Or is that idea totally age-inappropriate?

So, all in all, life with 3 under 2 is going well. It's hard to believe that in such a short time I opened and closed the book on having babies. It'll be a tough first year but I know it'll pay off in the long run! 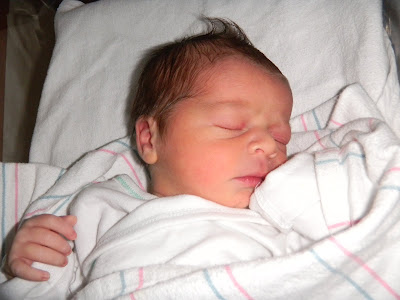 After much waiting, Matteo finally made his arrival on Tuesday, August 3 at 12:33am, weighing 8lbs 5oz and measuring 21.5 inches long. The experience was not exactly what I expected but for those of you have been through it, you're probably not surprised. Since this will be my last and only time, I want to record, to the best of memory, how Matteo made his way into this world.

8:00am - We started the pitocin. I got comfortable and not much happened for a while. I could feel contractions, but they were more like menstrual cramps than anything else.

12/1:00pmish - My water broke. Or I thought it did. Turned out to just be a leak but it sure felt like more than that. After that, the contractions started to get much stronger. Billy was great at helping my breathe and relax through them.

4:00pm - My OB arrived and by that point, my contractions were 2 minutes apart but I had not progressed much - still at 2cm. Contractions were beyond manageable so I agreed to the epidural.

5:00pm - Got epidural and everything was immediately better. They reduced the pitocin so the contractions slowed down a bit but, either way, I couldn't feel it. I took the opportunity to get lots of sleep.

10/10:30pm - They checked me again and I was 10cm! OB told me I would start pushing soon but the nurse told me otherwise as soon as she left the room. (I love the nurses vs. doctors thing. Very entertaining to a layperson like me). She told me I would push when I felt like I had to and that I should ignore the doctor. She spent some time trying to keep her out of the room. so as not to interfere with nature. :)

11:00pm - I declared that I felt the need to push. My doctor had sneaked into the room somehow and helped intruct me through my first few pushes. Then she told me average length of time to push out a first baby was 2 hours. I tried really hard not to believe her.

The nurse came in and took over the coaching along with Billy. There was lots of moving positions but, because of the epidural, I could do much more than lie down. I stayed mostly side lying which was much more comfortable for me and seemed to work for the baby, too.

Pushing was hard and not really what I expected. Both people who gave me advice on pushing said that you do it like you're having a #2. I would now agree with them. What I didn't expect was how hard it would be on my abs! It was like every push was the hardest crunch I ever did in my whole life. And I did them for 10 seconds at a time, 3 or 4 times in a row with a 30-60 second break in between "sets." It was a workout like nothing I've ever done and I played 4 years of rugby in college. To help me push, they brought in an extra nurse so I had a nurse on each side for me to push off against and Billy helped me hold me head up to do the crunches.

12:15am - They called the OB in and then I knew that we were truly getting close. They had the mirror set up for me to see what was happening but I couldn't really make out what I was seeing. At some point, I got an episiotomy but couldn't feel it. About 15 more minutes of pushing as hard as I could and Matteo finally made his way out at 12:33am. 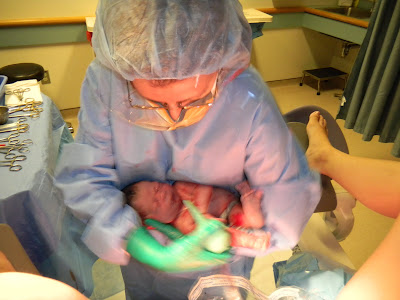 I couldn't hold him immediately because he had swallowed something and they had to check him out. The pedis declared him 100% fine, I got stitched up and by 1am, I got to hold him and nurse him for the first time. 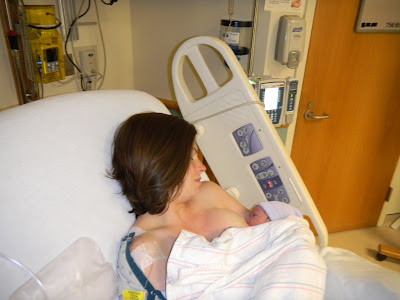 All in all, I am so happy that I got to have this experience. And, above all else, so happy to finally meet our littlest boy.

At 5:50 this morning, we called the hospital and finally got the go ahead to come in for our induction. We live just a couple minutes from the hospital so we had plenty of time this morning to get ready for our big day. My parents came over just before we headed out to take over twin duty and Auntie Kim is also on her way. 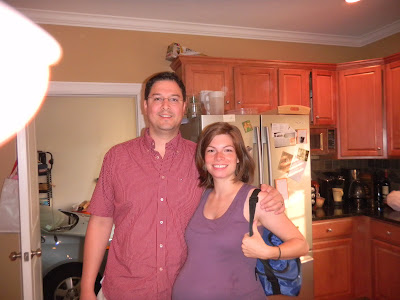 (Billy and I on our way to the hospital. And my mom's fingertip)
As I write this, I am hooked up to the pitocin. Not the way I wanted this labor to go down but Matteo is just a stubborn little boy. I am still only 1-2cm dilated and about 70% effaced which means I have made no progress since Tuesday! I think he would have waited until Labor Day if we had let him. Contractions really haven't started yet but it's only been about 15 minutes or so since they hooked me up. Wish me luck!! 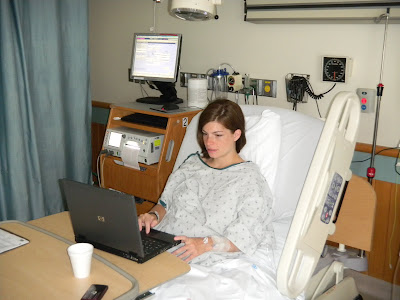 Just to get this out of the way, yes I'm still pregnant. Yes, that means I am 41 weeks and 1 day along. Tomorrow (Monday) we will try for the third time to get me into the hospital to be induced. I have nothing more to say about it at this point. But rest assured I will put up a post right before we leave for the hospital, one way or the other.

Anyway, to the topic of the post: Toddlers are weird. This one is mainly about Sebastian. Not that Collette doesn't have her adorable quirks but Sebastian is exhibiting a few that I really don't want to forget:
And I know this list will only get longer as the toddler months continue! What weirdness are your toddlers displaying these days?