I think its clear that Matteo is definitely neglected.  At least when it comes to my dedication to chronicling his infancy.  Let's hope he doesn't hold it against me.

I missed his 10 month old post altogether - mostly because I was in Montreal celebrating my 30th birthday but is that really an excuse?  :)  What I would have said in that post is that is got two teeth and has only bitten me a few times.  That he is saying "mama" and "dada/papa" and waving.  But all that's old news now.

His 11th month has been even more fun than his 10th.  He is taking baby steps, literally.  He knows how to "do" the hat song - those of you in EI know what I'm talking about.  I'm pretty sure he is signing "all done."  He has added "hi" and "uh-oh" to his vocab.  "Uh oh" is his favorite because he gets to drop something on the floor and then say "uh oh" over and over and over and over again.  He's learning to climb the stairs which is not so fun because he hasn't mastered the not-falling-down-once-you're-a-few-steps-up part.

He still loves to eat shoes, paper and chalk.  He has taken to attacking Sebastian when Sebastian is getting a diaper change.  Or he tries to grab the dirty diaper.  In other news, I really need to potty train Sebastian.  Let's just say I was right when I said it would be hell on earth training him.

Eating and sleeping are still great.  Of the three, Matteo is my best eater.  I'm enjoying it while it lasts because that toddler-picky phase will be here before I can say "just one bite, for god-frickin'-sake!!"  While two naps a day are going very well, I am planning to switch him one nap by the start of school.  I know that way early but it will make school drop off much easier.  Not to mention I don't want to be stuck at home now that I'll finally have some time to get stuff done without the twins in tow.  We'll see.

One other thing I notice with Matteo is just how much he learns from Sebastian and Collette.  The Hat song is one example.  He also plays with cars (like, actually pushes them along the floor just like Sebastian and Collette do), tries to do puzzles, uses drum sticks on the drum, etc.  It makes me grateful that they get all this time together.  Not to mention the fact that Sebastian and Matteo have become like peas and carrots.  Watching them play together is just too cute.  The stuff us parents live for.

And here my littlest man in his chair.  Filling it up too quickly. 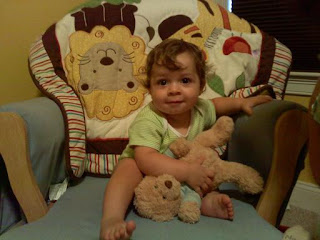