On Wednesday, at 12:30am while we were all fast asleep, Matteo officially became a one year old!

Cliched as it may be, this year has flown by!  Life with three (very young!) kids is busy, fun, frustrating, difficult and joyful all at the same time.  And it provides lots of fodder but not enough time for blogging as evidenced by my lack of posts and updates during my littlest one's first year.

As if he knew he would be turning one and wanted to celebrate with a big achievement, he started walking just a few days before his birthday.  He has been taking steps for a while but still favored crawling for the most part.  Not so much anymore.  He is a man on a mission!  Usually that mission involves a ball, the dog's water bowl or Mommy.  Or the stairs.  Yes, he is a pro at climbing (crawl climbing) the stairs and I need to be extra vigilant about keeping the doggie gate up because he will be upstairs faster than Sebastian and Collette can yell "Noooo, Teooooo!!!!!!!!!!!"

And he is talking so much, it amazes me.  He tries to repeat so much of what we say and seems to be adding words to his vocabulary at a pretty good pace.  He definitely says "ball" and I think he has been trying to say Lola, which is a hard one to say.  He signs "all done" and tries to say it but isn't quite there.  He even tries to sing and you'll hear a little tune come out of his mouth that sounds a heck of a lot like the melody to Twinkle Twinkle Little Star.

I know that this coming year will be full of fun now that we have the "baby" phase behind us as a family but I am so grateful for this past year.  Matteo showed me that maybe I am a baby person - I almost didn't mind those midnight feedings, all snuggled up with him watching him drift back into his warm milk drunkenness.  He has brought out the sweet side of his brother and sister (usually) who try to take care of him and cheer him up when he's sad and play with him when he's happy.

Here's to another terrific year with a most terrific boy.  Happy (belated) Birthday, Matteo! 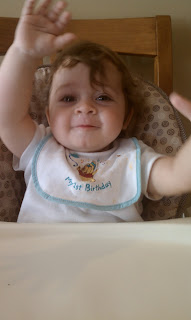