Makes My Monday: Twins' Baptism (and a FB scam...)

The Heavens cleared the skies and let the sun rain down yesterday as our precious little babies were baptised into the Catholic Church. It was a very nice ceremony, with about 5 other babies in attendance. Needless to say, the Soto Twins stole the show. Sebastian was so enthralled with the church, he would not stop squirming on my lap, as I tried to keep my skirt down and not flash the entire congregation. And Collette started blowing raspberries as soon as the priest began the prayers. How angelic. 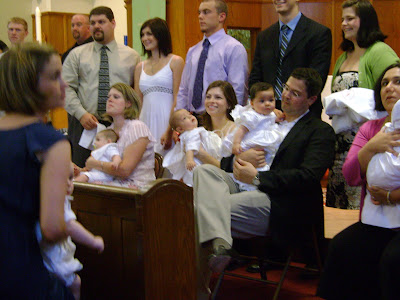 In this one, you can see Sebastian staring up at the ceiling. He was definitely digging the church. 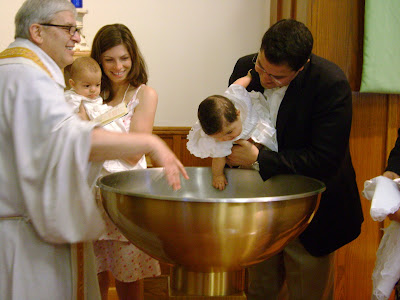 Collette likes the bath now and thinks she ought to jump right in and do it the old-fashioned way. 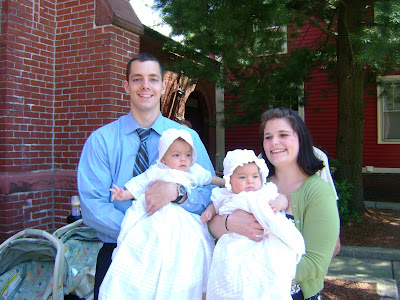 Sebastian and Collette with their Godparents, Nick (my little bro) and Jenn (BFF) 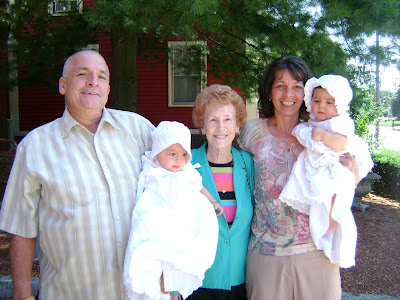 Twinnies with Grammy, Grandpa and Great-Grammy 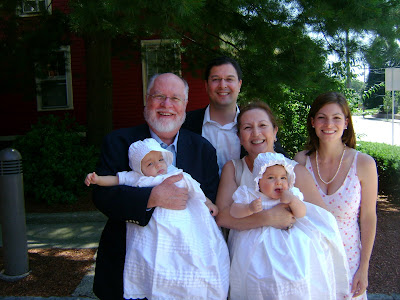 Last but not least, Billy and I are with Mimi (his mom) and Enny (Edwin, his step dad) who came all the way up from El Salvador!
***
On a completely unrelated note, there is a scam going on in Facebook-land. I was an attempted victim of the scam and here's how it happens. A "friend" starts a chat message with you and says that they are stranded, in London, and need money to get a ticket home. I got this message (in the form of a chat convo) from a friend of mine from college who I haven't actually spoken to since graduation in 2003. We didn't actually get to the part where the impostor asked for money but I knew something was up. The next day, I looked for her on FB but couldn't find her! Turns out, someone told her that her account had been hacked and she was able to freeze it.

The reason this is so scary to me, and the reason I'm taking the time to write about it here, is because this has been going on since, AT LEAST, January! There isn't a lot FB can do in the short-term to correct it but I hope that they will be making password rules more stringent so that its harder to break in to accounts. I had not heard about this scam until it happened to me this weekend. I started doing some google-research and found lots of other stories, going as far back as January - but probably it goes back further. So, beware!! DO NOT SEND MONEY TO FRIENDS IN LONDON (or elsewhere) UNLESS YOU know IT'S THEM!


Check in with Twinfatuation and brighten your Monday!