The Soto family is on a staycation of sorts. Billy is between projects, working for the Man, so he took this week off. We may have made plans to go somewhere (maybe some place where it doesn't rain all the time) but it was so last minute that his vacation had to be a simple staycation.

What that means for me is that I pretty much get to do the same thing I always do except I only have to do half the work. Roughly. I won't keep score. And despite the rain, we are trying to make the best of what the area has to offer. We went to the Stone Zoo on Monday. The sun was out and babies were in a good mood. The zoo doesn't have much but it was fun enough - at least a new place to push around the stroller. The highlight was seeing a jaguar throw up. Hot. 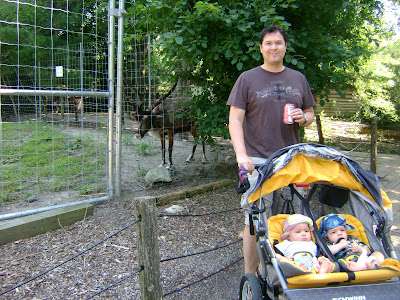 Billy with the twins, saying hi to the dying reindeer. (OK, he wasn't dying, he was just losing his hair and growing new antlers for summer, but it looks a lot like dying.)

Yesterday was a total wash out - literally, crazy down pour T-storms in the afternoon. We had planned on doing lunch out with the babies after picking up our CSA share. But, Billy had to take some weird, cryptic call for work with some lawyers and he was supposed to be in a "quiet place where no one could hear him." He figured he could just take the call from the car while I walked around the shops with the babies. Well, the rain was so bad we couldn't even get out of the car to go into the restaurant. So, he took the call from the car, in the parking lot of the shopping plaza with the rain so loud that I was sure he couldn't hear a word those lawyers were saying. And then the thunder and lightning got the babies all worked up and I was in the back trying to keep them from crying hysterically. Good times.

Not sure what's on the docket for the rest of the week. We're hoping to go to the beach, or at least the shore and eat some good seafood. 'Tis the season for fried clams and lobster rolls. And on Sunday, the twins will be baptized - I'll be sure to report on that, of course!

So, if you don't see me here for a few more days, it's because I am spending quality time with my family.

PS - I totally need a new camera. I have photo-envy of all those other bloggers out there. Any suggestions??
at 8:57 AM