A couple months ago, I posted a little video of Sebastian's mad rolling skills. Well, he is at it again but now he has become a master at rolling from his back to his belly. Each morning when I wake up, I peek at the monitor to see him on his belly, either still sleeping or doing the baby version of push-ups.

Meanwhile, Collette has decided that rolling is for lesser babies. She would much rather work on her abs by grabbing her feet and trying to sit up from a laying position. Hmmm. Maybe I should join her... 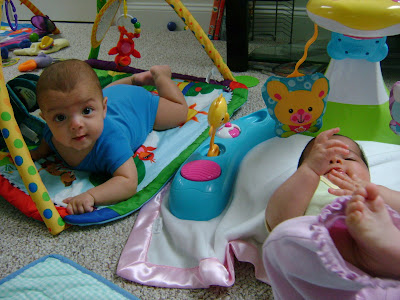 Here they are, in their preferred positions. Sebastian just flipped onto his belly and Collette is reaching for her little feet.

Again, this is one of those things that I like about having twins. In most respects, Collette is developmentally "ahead" of Sebastian. She slept through the night long before he did, she is bigger than him, she has much better head, neck and core control than he does. But the rolling thing, its all Sebastian. He can do both with no problem and she does neither! It's just a nice reminder that the range of normal is BIG and most things are no cause for concern. Both babies are alive - and healthy, happy and loved, to boot! I've heard those are the important things so I've got that going for me.

Check out some other two-fers at Who Says 8 is Enough - and its not just for twins!!