Way Back When-esday: This one time when I touched Jon Bon Jovi

A month or so ago, I mentioned that I am a big Bon Jovi fan and that one time I touched Jon (the lead singer). Cheryl at Twinfatuation requested the story so, now that I have my scanner up and running, here it is for Way Back When-esday:

When: May 2001
Where: Bon Jovi Concert, MCI Center, Washington DC 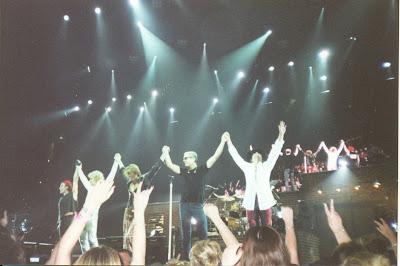 Bon Jovi taking their last bow of the night

Ok, so I'm a huge Bon Jovi fan. Not the biggest fan, but I get butterflies just at the thought of seeing them live. They have been my favorite band since my best friend, Kristin, got me hooked back in middle school. Kristin's older sister, Kim, was a teenager in the band's prime and got her hooked first so we all shared the obsession together.

Now Kim, she really is their biggest fan. She is in the fan club and follows them around the country. She knows all the guys in the band and some of their family members - no joke. I've seen her pictures on Facebook. She's a total groupie, like out of Almost Famous, or something. As their #1 fan, she gets awesome seats to concerts. And as a fringe benefit of being the best friend to the sister of Bon Jovi's biggest fan, I got one of those tickets for a show they did in DC.

Kim, one of her Bon Jovi groupie friends, and I drove down the night before the concert to crash at Kristin's place - her Georgetown dorm "suite." Of course, in the end it was totally worth the 8-hour drive and crappy sleeping arrangements because from our second row seats, I managed to score us 4 passes to get on the side stage for a 20-minute set! It was there that Jon, during a Richie guitar solo, jumped into our little crowd. I found myself in charge of his left shoulder. And then didn't wash my hands for a few days. He was rather sweaty but damn, does he look even better close up!

Email ThisBlogThis!Share to TwitterShare to FacebookShare to Pinterest
Labels: about me